This Virtual Side Event was organised on 29 October 2021 on the Margins of the United Nations General Assembly First Committee on Disarmament and International Security exploring the role of HCoC and other Confidence Building Measures in the field of missiles.

I/ THE STATE OF BALLISTIC PROLIFERATION TODAY 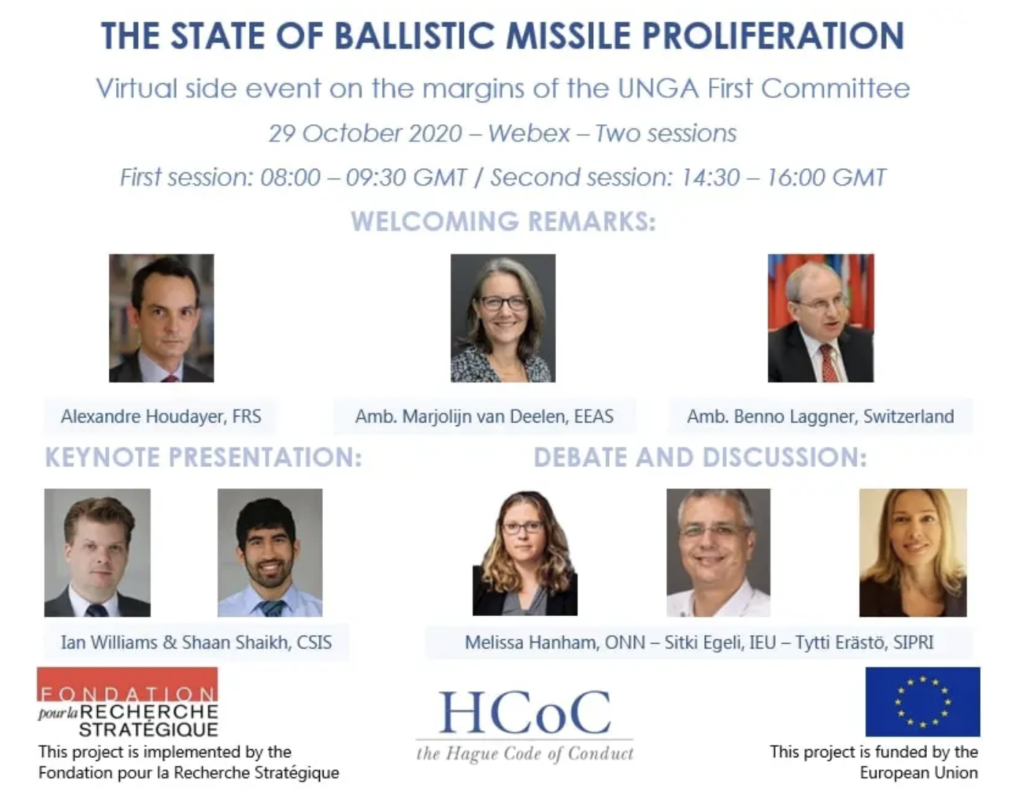 ALEXANDRE HOUDAYER, FRS’ Secretary General, opened the virtual event by recalling the three recent subscriptions to the HCoC (by Saint Vincent and the Grenadines, Equatorial Guinea and Somalia) which took place in the last year. The HCoC remains a modest yet effective tool as unpredictability increases in the existing international system, due to a changing power balance but also technological dynamics – and the brutal disruptions of the global pandemic we are currently experiencing.

AMBASSADOR MARJOLIJN VAN DEELEN, EU Special Envoy for Non-Proliferation and Disarmament, started by stressing that ballistic missile proliferation continues to be a serious concern to international peace and security, as reaffirmed in several UN Security Council Resolutions. Several regions of the world are engaged in a new arms race, creating security risks and geopolitical pressures. Despite this destabilising situation, there has been no legally binding agreement to stop ballistic missile proliferation, thereby compelling the international community to uphold and strengthen existing measures. To this end, the EU notably provided continuous diplomatic and financial support to the HCoC. It also encourages states to vote in favour of the upcoming UNGA Resolution on HCoC.

AMBASSADOR BENNO LAGGNER, Current HCoC Chair from the Swiss Ministry of Foreign Affairs, recalled that Switzerland subscribed to the HCoC at its onset, in 2002, and the decision to take on the Chairmanship is another expression of the Swiss support for the instrument. Speaking in a national capacity, he stressed that ballistic missile activities and their destabilising effects are becoming a growing security concern. The increase in the numbers, geographic spread and sophistication of ballistic missiles is worrying. In this context, the HCoC, the MTCR and UNSCR 1540 constitute the key multilateral framework to address this trend. While the HCoC – with its focus on transparency and confidence-building measures – remains a modest instrument, it fills an important gap in the absence of legally binding norms in this area. Importantly, it does not constrain the development of space programs, and its scope is limited to ballistic missiles capable of delivering WMDs (and also covers SLVs). Challenges remain however, namely with regards to the further universalisation, enhanced implementation, and limited scope of the HCoC. The priorities of the Swiss chairmanship will be to strengthen the implementation of the Code’s provisions, and to increase the visibility of the Code – including through the UNGA resolution.

IAN WILLIAMS, Fellow, International Security Program and Deputy Director, Missile Defense Project, Center for Strategic and International Studies (CSIS), and SHAAN SHAIKH, Program Manager and Research Associate, Missile Defense Project, introduced their recent report on missile proliferation in the case of Yemen. Since March 2015, the use of ballistic missiles by the Houthis has become a weekly and almost daily occurrence in the Yemen conflict. The earlier attacks all involved missiles that Yemen possessed prior to the conflict, and that the Yemeni government lost control of, such as Scud B/C and SS-21 Tochka missiles. The latter defined the early period of the conflict, as they are the deadliest and most accurate ballistic systems that the Houthis possessed. As the conflict progressed, new systems have been displayed and used. They include Badr, Qaher and Burkan missiles, which the Houthis claim they domestically designed and produced. However, the Qaher appears to resemble Soviet surface-to-air missiles, the Badr is most likely an Iranian-Fajr derived rocket (which Iran has proliferated across the Middle East), the Burkan missile very likely originates from Iran, with these missiles being smuggled in pieces and then assembled in Yemen according to a UN report. These Iran-sourced weapons are becoming more long-range and more sophisticated (e.g. Burkan-2H – which is essentially the Iranian Qiam-1).

By using ballistic systems to inflict military, but also economic and political costs on the coalition, the Houthis’ ultimate goal is to stay in power in Yemen. They have not been very successful however. In terms of military costs, the number of casualties remained very limited and many missiles missed their target. Economic costs have also been relatively controlled, as the attacks have been very sporadic and hit targets have recovered quickly. Finally, in terms of political costs, the attacks on Saudi Arabia have certainly been embarrassing and increased pressure. However, the Houthi missile attacks have also backfired, making them look like the aggressor. Moreover, the Arab coalition mounted a counter-missile strategy composed of an air campaign, maritime and air restrictions, and air and missile defences. In short, the Houthis’ access to ballistic missiles has enabled them to resist the Arab coalition, but not to defeat it. The war in Yemen has seen the most extensive use of BMs and other asymmetric aerial weapons of any conflict in recent history, and the use of those systems has undoubtedly contributed to the prolonging of the conflict, and the suffering of the Yemeni people. Long-range missiles could present an opportunity to negotiate an end to hostilities however: should the Houthis accept limits on their long-range missiles, allowing Saudi Arabia to accept a role for the Houthis in Yemen?

DR SITKI EGELI, Assistant Professor, Political Science and International Relations, Izmir University of Economics, then provided an overview of proliferation networks, dynamics and perspectives to participants. While it is becoming increasingly difficult to define those systems, we can count 34 states possessing ballistic missiles to date, and 17 states and non-state actors that produce them. The motivations to deploy ballistic systems are many: before launch, they are hard to find and destroy; after launch, they are difficult to detect, track and intercept; their constitute an alternative to air power; and can act as a strategic equalizer.

While there are downsides to ballistic missiles, including their low accuracy (until now) and the need to invest in highly specialised technology, there is a renewed interest for ballistic missile acquisition, with many newcomers or old comers who are reacquiring ballistic capabilities. This interest is partly explained by a new stream of “tactical” ballistic missiles that are more reliable, responsive, accurate and affordable and that have new battlefield applications (e.g. anti-ship). It is also partly explained by the development of manoeuvring missiles at the tactical and strategic levels, including hypersonic vehicles and systems coupled to manoeuvring warheads (MaRV). These innovations complicate efforts to defend against potential strikes. As a result, there is an accelerating, untamed missile race in the Middle East, East Asia and Europe, at the same time as existing arms control arrangements such as the INF are disappearing, and that ballistic missile use in conflicts by states and non-state actors is increasing.

Against this picture, a number of tools exist to render the proliferation of such systems more difficult. The first is export and technology controls, which serve to erect material, technological and cost barriers, but can encompass double standards. Missile defence is another instrument: while it can constitute a useful tool for crisis stability and escalation management, it remains beyond the reach of most states and risks setting off vertical proliferation. Arms controlcan then be mentioned: it remains a key instrument, but states’ motivations are hard to eradicate, and the existing arms control architecture has been increasingly fragile in the past few years. Finally, there remain transparency and confidence-building measures such as the HCoC: they provide short-term reassurances while encompassing the long-term goal of building norms, constraints and responsible behaviour on the part of actors.

DR TYTTI ERÄSTÖ, Senior Researcher, Nuclear Disarmament, Arms Control and Non-proliferation Programme, SIPRI, presented the main results of an upcoming SIPRI paper focusing on missiles (both ballistic and cruise missiles) in the Middle East. The three main takeaways of the report were outlined: firstly, missile ranges are not the only measure determining their strategic significance: some missiles, when combined with aircraft, see their range augmented; secondly, the issue of missile proliferation is not limited only to ballistic missiles in the hands of Iran, and a more comprehensive approach is needed; and thirdly, it is not a new problem – the accumulation of missile capabilities has taken place over a long period of time – but it has intensified in recent years, and the threshold for using ballistic missiles has lowered.

The missile possessor states in the Middle East were then listed: Israel – the only regional country to have nuclear-armed missiles; Iran – which has the region’s largest missile arsenal, and demonstrated its readiness to use them, such as against ISIS in 2017 and more recently against US force in January 2020; Saudi Arabia, which relies heavily on imports of ballistic missile technology, namely from China, and is increasingly involved in domestic production; the United Arab Emirates (UAE), which have acquired missiles from France and the US, and have reportedly used shorter-range air-launched cruise missiles against the Houthis in Yemen; other recent developments include the sales by France of air- launched cruise missiles to Qatar and Egypt; and by the US to Turkey – which also produces short-range ballistic missiles. Israel and the Gulf states are also investing heavily in missile defence systems.

To manage the missile threat in the Middle East, a number of recommendations can be outlined. Increasing transparency and scrutiny on conventional arms exports, as well as confidence and security-building measures (CSBMs) through relevant multilateral instruments should be encouraged. For instance, regional states that have not yet joined the HCoC should do so. While political obstacles remain, as Iran and Egypt have long criticised the HCoC for having been created outside the UN framework, there could be room for change if those states see the benefits of increased transparency. Clarifying international norms on missiles is also key. While the MTCR provides strict limitations on ballistic missiles exports, more inclusive international discussions (such as UN export dialogues) are needed on this topic. De-esclating heightened tensions between the US and Iran should also be a priority. The US withdrawal from the Joint Comprehensive Plan of Action (JCPoA) was partly justified in terms of Iran’s missile activities, but by restoring the agreement, a major driver behind Iran’s missile activities – Iranian threat perceptions – would be alleviated. Finally, developing regional CSBMs should be encouraged. One framework for missile related CSBMs could be to develop a Middle East Weapons of Mass Destruction Free Zone (ME WMDFZ) that includes ballistic missiles, but this remain unlikely as long as Israel maintains its nuclear ambiguity. Certain steps could however be explored, like a regional dialogue focusing on clarifying the role of ballistic missiles, or the pre-notification of missile and satellite launches.

The HCoC and Northeast Asian States

A majority of Northeast Asian states currently possess or seek to acquire ballistic missiles, producing a missile race and an increase in the number of tests as states are developing their capabilities further. Proliferation risks also remain high, and it is noteworthy that only South Korea and Japan have joined the MTCR.

Since its inception and through the collective outreach efforts of its Chairs, the Executive Secretariat, the EU and the United Nations, the Hague Code of Conduct has received growing support. It has improved its efficiency and implementation through a series of initiatives which have made it more easily accessible.