Key documents about the HCoC

Reaffirming their commitment to the United Nations Charter;

Stressing the role and responsibility of the United Nations in the field of international peace and security;

Recalling the widespread concern about the proliferation of weapons of mass destruction and their means of delivery;

Seeking to promote the security of all states by fostering mutual trust through the implementation of political and diplomatic measures;

Having taken into account regional and national security considerations;

Believing that an International Code of Conduct against Ballistic Missile Proliferation will contribute to the process of strengthening existing national and international security arrangements and disarmament and non-proliferation objectives and mechanisms;

Recognising that subscribing States may wish to consider engaging in co-operative measures among themselves to this end;

1. Adopt this International Code of Conduct against Ballistic Missile Proliferation (hereinafter referred to as “the Code”);

2. Resolve to respect the following Principles:

a) Recognition of the need comprehensively to prevent and curb the proliferation of Ballistic Missile systems capable of delivering weapons of mass destruction and the need to continue pursuing appropriate international endeavours, including through the Code;

b) Recognition of the importance of strengthening, and gaining wider adherence to, multilateral disarmament and non-proliferation mechanisms;

c) Recognition that adherence to, and full compliance with, international arms control, disarmament and non-proliferation norms help build confidence as to the peaceful intentions of states;

d) Recognition that participation in this Code is voluntary and open to all States;

e) Confirmation of their commitment to the United Nations Declaration on International Cooperation in the Exploration and Use of Outer Space for the Benefit and in the Interest of All States taking into particular Account the Needs of Developing Countries, adopted by the United Nations General Assembly (Resolution 51/122 of 13 December 1996);

f) Recognition that states should not be excluded from utilising the benefits of space for peaceful purposes, but that, in reaping such benefits and in conducting related cooperation, they must not contribute to the proliferation of Ballistic Missiles capable of delivering weapons of mass destruction;

g) Recognition that Space Launch Vehicle programmes should not be used to conceal Ballistic Missile programmes;

a) To ratify, accede to or otherwise abide by:

. the Treaty on Principles Governing the Activities of States in the Exploration and Use of Outer Space, including the Moon and Other Celestial Bodies (1967),

. the Convention on International Liability for Damage Caused by Space Objects (1972), and

. the Convention on Registration of Objects Launched into Outer Space (1975);

b) To curb and prevent the proliferation of Ballistic Missiles capable of delivering weapons of mass destruction, both at a global and regional level, through multilateral, bilateral and national endeavours;

c) To exercise maximum possible restraint in the development, testing and deployment of Ballistic Missiles capable of delivering weapons of mass destruction, including, where possible, to reduce national holdings of such missiles, in the interest of global and regional peace and security;

d) To exercise the necessary vigilance in the consideration of assistance to Space Launch Vehicle programmes in any other country so as to prevent contributing to delivery systems for weapons of mass destruction, considering that such programmes may be used to conceal Ballistic Missile programmes;

e) Not to contribute to, support or assist any Ballistic Missile programme in countries which might be developing or acquiring weapons of mass destruction in contravention of norms established by, and of those countries’ obligations under, international disarmament and nonproliferation treaties;

4. Resolve to implement the following:

a) Transparency measures as follows, with an appropriate and sufficient degree of detail to increase confidence and to promote non-proliferation of Ballistic Missiles capable of delivering weapons of mass destruction:

i) With respect to Ballistic Missile programmes to:

. provide annual information on the number and generic class of Ballistic Missiles launched during the preceding year, as declared in conformity with the pre-launch notification mechanism referred to hereunder, in tiret iii);

ii) With respect to expendable Space Launch Vehicle programmes, and consistent with commercial and economic confidentiality principles, to:

. provide annual information on the number and generic class of Space Launch Vehicles launched during the preceding year, as declared in conformity with the pre-launch notification mechanism referred to hereunder, in tiret iii);

. consider, on a voluntary basis (including on the degree of access permitted), inviting international observers to their land (test-) launch sites;

iii) With respect to their Ballistic Missile and Space Launch Vehicle programmes to:

b) Subscribing States could, as appropriate and on a voluntary basis, develop bilateral or regional transparency measures, in addition to those above.

a) Hold regular meetings, annually or as otherwise agreed by Subscribing States;

b) Take all decisions, both substantive and procedural, by a consensus of the Subscribing States present;

c) Use these meetings to define, review and further develop the workings of the Code, including in such ways as:

. establishing procedures regarding the exchange of notifications and other information in the framework of the Code;

. establishing an appropriate mechanism for the voluntary resolution of questions arising from national declarations, and/or questions pertaining to Ballistic Missile and/or Space Launch Vehicle programmes;

. naming of a Subscribing State to serve as an immediate central contact for collecting and disseminating Confidence Building Measures submissions, receiving and announcing the subscription of additional States, and other tasks as agreed by Subscribing States;

. and others as may be agreed by the Subscribing States, including possible amendments to the Code.

Since 2004, the United Nations General Assembly has adopted several resolutions in support of the HCoC: 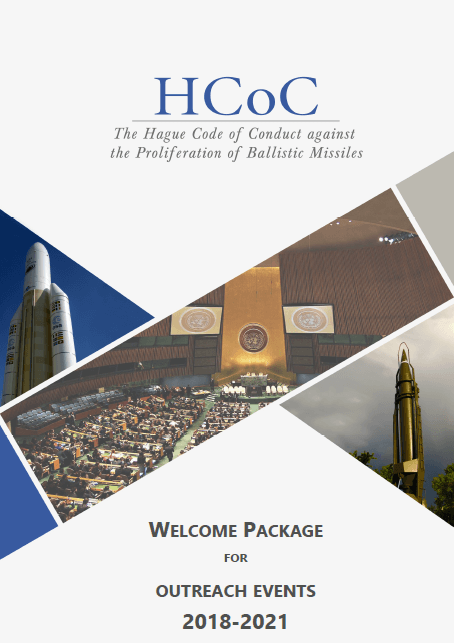 The HCoC welcome package presents all the necessary information about the Code as well as the relevant points of contact. It is available in the following languages:

This leaflet describes the European Union’s support for the Code. It includes:

It is available in the following languages: 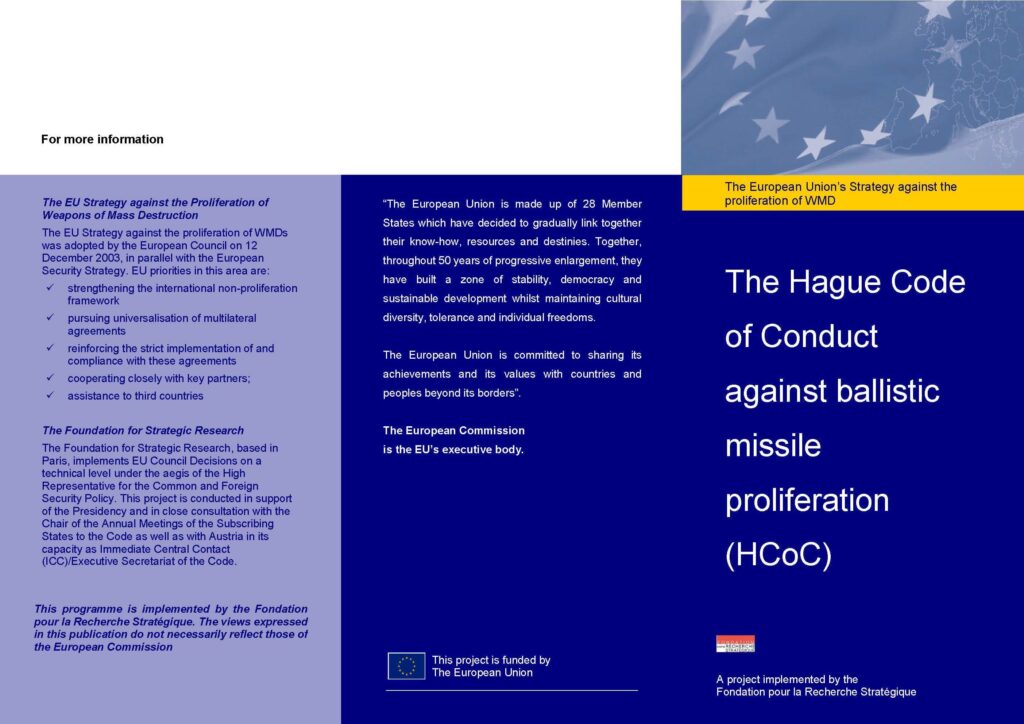