Rockets, Missiles, and Space: lessons from the The Hague Code of Conduct and beyond

On 3 June 2020, UNIDIR with the support of FRS, Secure World Foundation and the EU, dedicated one episode of its virtual seminar series « The Launchpad » to the links between rockets, missiles and missile defense and especially explored the role of the Hague Code of Conduct as a confidence-building measure. 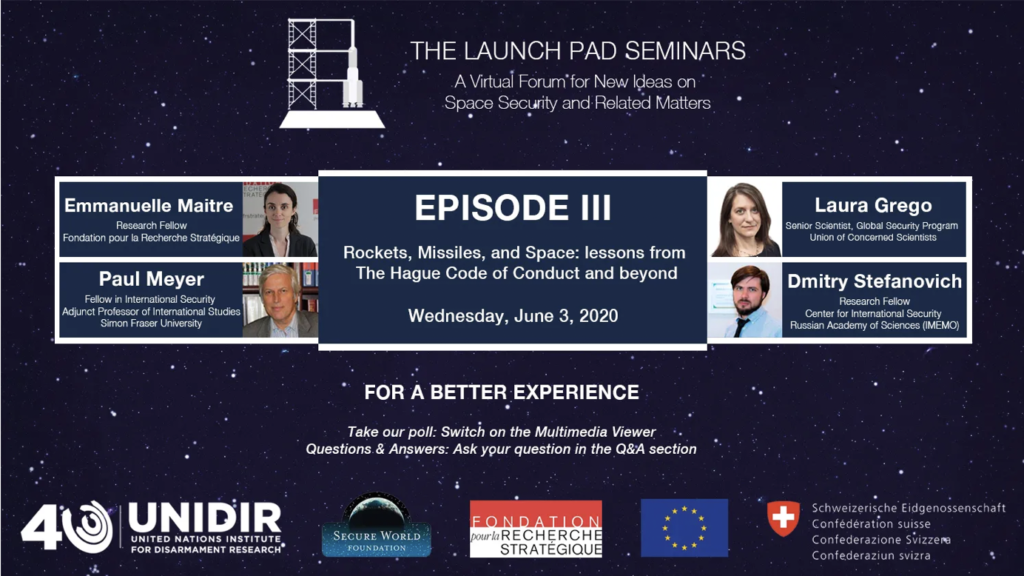 Given the specific sanitary conditions prevailing in Spring 2020, UNIDIR decided to cancel the annual Space Security Conference initially planned in April 2020 and to transform the event into a virtual one. The Launch Pad Seminars: A Virtual Forum For New Ideas On Space Security And Related Matters is a series of 4 one-hour long webinars in which experts will explore space security and related challenges, and findings of new research will be presented. With the support of the Fondation pour la Recherche Stratégique (FRS) – through the EU financial contribution – and the Secure World Foundation (SWF), this webinar series included a session dedicated to the promotion of the HCoC, titled: Rockets, Missiles, and Space: lessons from The Hague Code of Conduct and beyond, and therefore gave a platform to discuss HCoC-related issues. The webinar was well attended with around 230 attendees. It took the form of a 10-minute presentation followed by comments from respondents. Attendees were invited to comment and ask questions to the panellists.

More information on the webinar series, including the video recordings of all four sessions, can be found here.

Emmanuelle Maitre (FRS) moderated Episode 3 on lessons from The Hague Code of Conduct (HCoC) and beyond. She introduced the session by noting that the HCoC is of specific interest as it is an example of soft law confidence-building measure (CBM) that is working effectively. It is also notable as an instrument dealing with dual-use items. Pointing to the momentum achieved with three new HCoC subscriptions since the beginning of 2020, she congratulated the outgoing HCoC Chair (Norway) and welcomed Switzerland as the new rotating Chair of the Code.

The first presentation made by Paul Meyer (Simon Fraser University) opened on the historical risks of the militarization of space. Elaborating on an upcoming paper published by UNIDIR, Paul Meyer focused on the tense relationship between space security and missile defence, and developed the diplomatic undertaking adopted during the Cold War and proposed later to mitigate the risk of an imbalance in strategic stability due to the positioning of offensive or defensive weapons in space. After recalling the current developments in terms of missile defence and anti-satellite weapons, Paul Meyer assessed the current initiatives promoted to increase space security and spoke in favour of working on an optional protocol to the Outer Space Treaty, on the negotiation of an international Code of Conduct on space activities and on the adoption of a ban on destructive anti-satellite (ASAT) tests.

The first respondent, Dmitry Stefanovich (IMEMO – Russian Academy of Sciences), reflected on the role an instrument such as the HCoC can play in addressing these issues. He pointed out the limited scope of the Code but insisted on the fact that states that are abiding by it show that they care about space security. He noted the similarities but also the differences between space launchers and ballistic missiles, recalling the failure to design a ‘universal rocket’. But progress made on the Avangard shows that connexions between civilian and military technologies are still important and that it is legitimate for the HCoC to cover both. Dmitry Stefanovich concluded his intervention by calling for the creation of an international early-warning system, which would also contribute to reducing the risk of unintentional escalation.

Laura Grego (Union of Concerned Scientists) then focused on the relationship between ballistic missile defences and anti-satellite weapons, which share many technologies, especially with regard to strategic missile defence. Especially, ABM interceptors may be as – if not more – effective against satellites deployed in lower orbit given their predicable trajectory and lack of protection in orbit. Laura Grego recalled the catastrophic production of debris created by the destruction of a satellite in orbit. Finally, she spoke out against the deployment of missile defence interceptors in space, which, to be effective, would require hundreds of systems in space and lead to an expensive and ineffective arms race given the lack of efficacy of these systems. 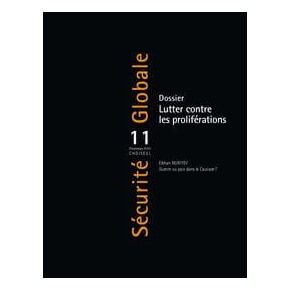 The Hague Code of Conduct (HCoC) against the Proliferation of Ballistic Missiles has been adopted in November 2002, in order to bolster the international effort to reduce and prevent the proliferation of delivery systems which can carry weapons of mass destruction.

The HCoC: A Small Yet Key Tool Against Ballistic Missile Proliferation

The HCoC was adopted in 2002, at a time where the international community pushed strongly for the adoption of norms to promote non-proliferation and disarmament. It was initially designed as a first step which would lead to further regulations in the field. However, rising international tensions have prevented states from engaging beyond the 2002 compromise.

The HCoC and Southeast Asian States

Only three out of ten Southeast Asian states have joined the HCoC to date (the Philippines, Cambodia and Singapore). This limited rate is noteworthy as Southeast Asia is increasingly concerned by the ongoing ballistic missile competition in broader Asia. Moreover, the region is actively investing to benefit from space technologies.