Non-Proliferation, Arms Control and Disarmament: Changes in the Field and Career Tracks 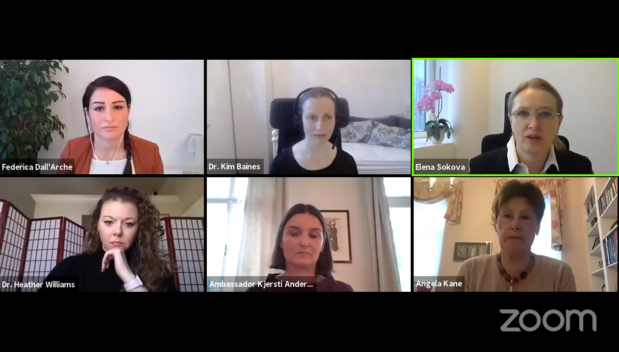 The fields of arms control, non-proliferation and security have been dominated by men. Though improvements have been made over the last decade, diversity is still lacking in terms of gender, color, and age. This observation is the driving force behind the Young Women and Next Generation Initiative (YWNGI) launched on 10 February 2021 by the Vienna Center for Disarmament and Non-Proliferation (VCDNP) and the International Affairs Institute (IAI) in Rome, Italy, in the framework of the EU Non-Proliferation and Disarmament Consortium. The Initiative encourages young women and the next generation to enter the non‑proliferation, arms control, and disarmament field, especially at a time in which the global pandemic has isolated many young people who may find themselves lacking resources and assistance.

The speakers addressed how the non-proliferation, arms control and disarmament field has changed over the years and provided insights into their own experiences in the field as well as offered recommendations for the next generation. Coming from diverse backgrounds, the speakers drew on experiences in the UN, government, natural sciences, and academia, emphasizing the diversity of the field itself and highlighting that there are many different pathways to enter the non-proliferation, arms control, and disarmament area. In her opening remarks, Angela Kane stressed that to make a difference in the field it is not necessary to have a background specifically on arms control and non-proliferation and encouraged the next generation to think of the field with a wider lens focused on international policy and security.

In reflecting on how the field has changed over the years, speakers noted that the representation of women has seen an improvement, with many panellists noting that at the start of their careers it was not rare to be the only women in a room full of men. Despite the improvement, however, Ambassador Andersen highlighted that “once you have gender parity within an organization you need to keep working on it because it is never achieved once and for all.” Dr. Baines also personally expressed excitement on “the paradigm shift that has been occurring over the last five years to be inclusive of women in technical and political disciplines.” This shift is also supported by the IAEA’s newly established Marie Sklodowska-Curie Fellowship Programme.

Panellists also offered insights and recommendations to early- to mid-career individuals. There was consensus among the panellists on the need to accept challenges, to reach out to colleagues and other experts, to build a network, and follow one’s passion. Caution was expressed in terms of networking though, noting that one needs to be conscientious of others time, and though many in the field are happy to help, such networking effort must be done with a purpose or question in mind. In this regard Dr. Heather Williams stressed the importance of being someone that other people want to work and network with, as the arms control, non-proliferation and disarmament field is a community and most people know each other and collaborate with one another.

Many participants were keen to learn of opportunities and recommendations for what they could actively be doing during the pandemic and beyond, especially as the implications of COVID-19 on the job market remain to be seen. Panellists provided plenty of ideas, including the importance of writing and publishing as it shows willingness to take intellectual risks. Speakers also stressed the need to invest in one’s skills, such as presentation skills, languages and intellectual curiosity in other fields of study. One way to expand one’s knowledge is through courses, traineeships, internships and mentorships, such as those offered by the James Martin Center for Nonproliferation Studies (CNS), King’s College London, Women in Nuclear, country embassies and permanent missions, and international organisations.

The event ended with an anecdote shared by Angela Kane emphasizing the importance of women needing to support one another in a still largely male dominated field. One way to do this is by promoting and establishing an advocacy network or group of like-minded individuals to make a statement that could lead to change.

More events like this one will be organized and the VCDNP and IAI look forward to connecting and making use of the virtual format with which we are now familiar. To learn more about VCDNP and IAI’s initiative and mentorship programme or email mzarka@middlebury.edu or f.dallarche@iai.it.